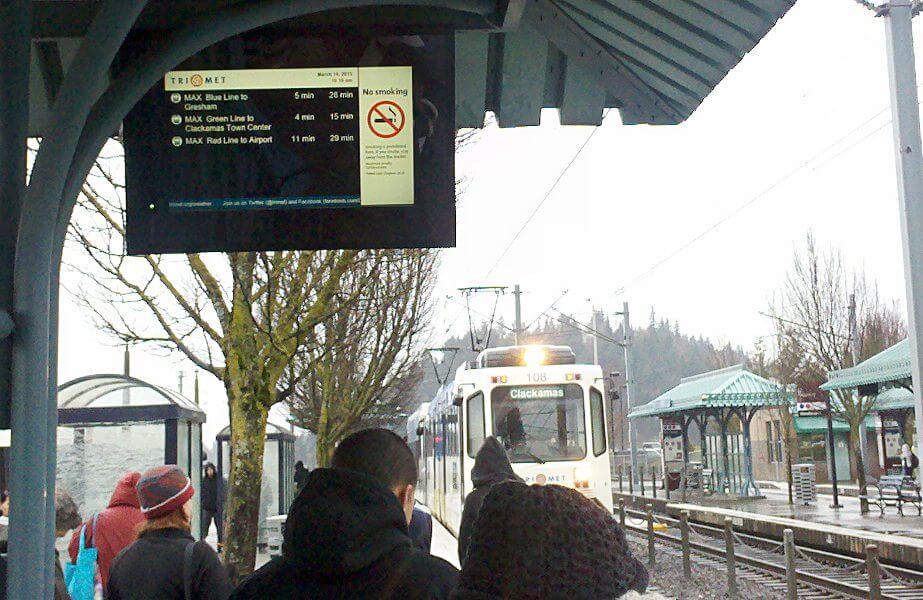 There were a number of interesting facts pointed out by The Cascade Policy’s John A. Charles, whose research we have cited before (see references #39 and #79), about the Portland MAX in his latest article, called: Transit Hypocrisy.

It is notable that he points out that that it has been said that there is a bias in recent American transit planning towards Light Rail, that may have been a result of why Light Rail lines have been appearing in the United States.  Many people triumph that it is a result of being a “good technology choice for price” that so many LRT systems have in recent years been appearing around the world, and this does not seem to be the case.

But some of the most startling examples he points out are towards one of America’s most notable Light Rail systems – the Portland Metropolitan Area Express (MAX), a mostly at-grade Light Rail Transit (LRT) system used by the City of Surrey frequently as an example and a model for this city.

Charles points out that TriMet – the organization in charge of Portland Transit – has failed to operate the promised frequencies on just about every MAX Light Rail line to be introduced. He points out these examples:

The most egregious example is the original MAX line that opened in 1986. At the time the Blue Line was being planned, TriMet promised that trains from Gateway to downtown Portland would run every five minutes during peak periods. Today, the actual frequency (known as “headways”) is every 8 minutes, or 60% worse than promised.
——

For the Yellow Line to North Portland, TriMet promised 10-minute service intervals for peak periods. Yet even with this lower bar, the agency could not meet its commitment. Peak-hour service on the Yellow Line currently operates at 15-minute headways, 50% below what was committed to.
——

The agency’s newest rail line, the Green Line to Clackamas Town Center, opened in September 2009. By then TriMet’s finances were so bad that project managers knew even before it opened that promised levels of service would not be met. Green Line service has been at least 33% below FFGA requirements since day one.
——

John and the Cascade Policy Institute consider all this to be part of a syndrome that is indeed occurring in Portland: “Transit Hypocrisy” – and it may have to do with the fact that by failing to operate their services at the promised frequencies, TriMet is violating requirements set by the Federal Transit Association:

The most important is that TriMet has consistently violated FTA requirements that local transit agencies successfully operate federally funded capital projects for at least 20 years.
——

The only things that can be blamed for the fact that none of Portland’s Light Rail Transit lines have operated at frequencies that were promised by TriMet are technology and lack of competition/ridership, the latter of which may be a result of the former’s limitations.  The most prevalent of which would probably be:

It is note-worthy that the MAX LRT recovered approximately just 45.2% of its operations and maintenance costs by farebox in 2011, which may contribute to an extremely low system-wide farebox recovery rate of just 27.8% in 2011.

For comparison, Vancouver’s TransLink, which operates the largest regional bus network in Canada (by area served) and the SkyTrain automated rapid transit system, has been seeing SkyTrain operations recover all 100% of its operations and maintenance costs by farebox.  It took less than a year for the newest Canada Line to reach the financial recovery break-even point – by hitting a ridership prediction 3 years early.  System-wide operating cost farebox recovery was over 60% [1] in 2011 – more than twice of that experienced by TriMet.

If this system is to be an example for Surrey, then the citizens of Surrey should be warned.  In particular, a frequency minimum of 2 minutes (in addition to larger vehicles than were planned) will be required to make any improvement over bus service to exist on the 104th Avenue corridor; and if TransLink were unable to sustainably and fiscally maintain those frequencies, travellers on the important corridor would see a significant reduction in transit service and capacity.  If TransLink were to, it would be in lieu of maintaining bus services elsewhere.

TriMet is now promising FTA that when the Milwaukie line opens in March 2016, it will offer peak-hour service every 10 minutes and off-peak service every 15 minutes. But since TriMet is unable to offer such service on any of its rail lines right now, no one should take this forecast seriously.
——

It’s noteworthy that through the 2009 economic recession, transit service in Portland was hit hard has gone through several decreases – at least four since 2009.  Portland’s TriMet was unable to maintain its promise of providing a 15 minute frequent transit network, stretching that frequency to 17 and 20 minutes on many bus lines.

Meanwhile, TransLink made significant service increases in 2009, in the midst of a recession; through the introduction of a driver-less SkyTrain line, the agency saw system-wide cost recovery increase significantly the following year.  All region-wide bus system service levels were maintained system-wide, while SkyTrain rail rapid transit service levels increased significantly starting that year, at – thanks to driver-less operation – little cost.

Portland, OR: LRT is so cost-ineffective, unable to operate at promised frequencies

4 thoughts on “Portland, OR: LRT is so cost-ineffective, unable to operate at promised frequencies”