As enthusiasm grows for a new express shuttle bus between downtown Surrey and Abbotsford International Airport, SkyTrain for Surrey is reaching out to the Abbotsford Airport Authority about the potential that the proposed Surrey Light Rail Transit (LRT) system could compromise these airport shuttles.

SkyTrain for Surrey is raising this issue as the City of Surrey intends to construct one of the proposed LRT lines on 104th Avenue, which will reduce traffic capacity on 104th Avenue from 4 lanes to 2 (104th Avenue is the primary arterial connecting downtown Surrey with the Trans Canada Highway and Abbotsford Airport).

The added congestion as a result of reduced traffic capacity can potentially result in scheduling difficulties for shuttle operators as a result of increased travel times, and can increase the cost of operating these shuttle services to the airlines and passengers. Heavy congestion on 104th Avenue may also result in shuttle passengers missing their flights, or flights being delayed due to a late shuttle bus.

“Surrey’s LRT plan will reduce traffic capacity on the city’s primary connection to Highway 1, and that’s not only going to create serious problems for NewLeaf’s YXX shuttles but also for other express transit services to downtown Surrey.”

Other transit services that could be affected include the proposed rapid bus service by B.C. Transit that would eventually link Downtown Surrey with the Fraser Valley, as well as TransLink’s existing express transit routes to Fraser Heights (337) and Langley (501 and 509).

SkyTrain for Surrey is adding this to a long list of issues regarding the proposed LRT system that the campaign has brought up with decision-makers and the community, among which is that the proposed LRT on 104th Avenue will increase transit travel times against the existing express transit services.

Our campaign team has produced this diagram to show the trade-offs of introducing LRT on 104th Avenue: 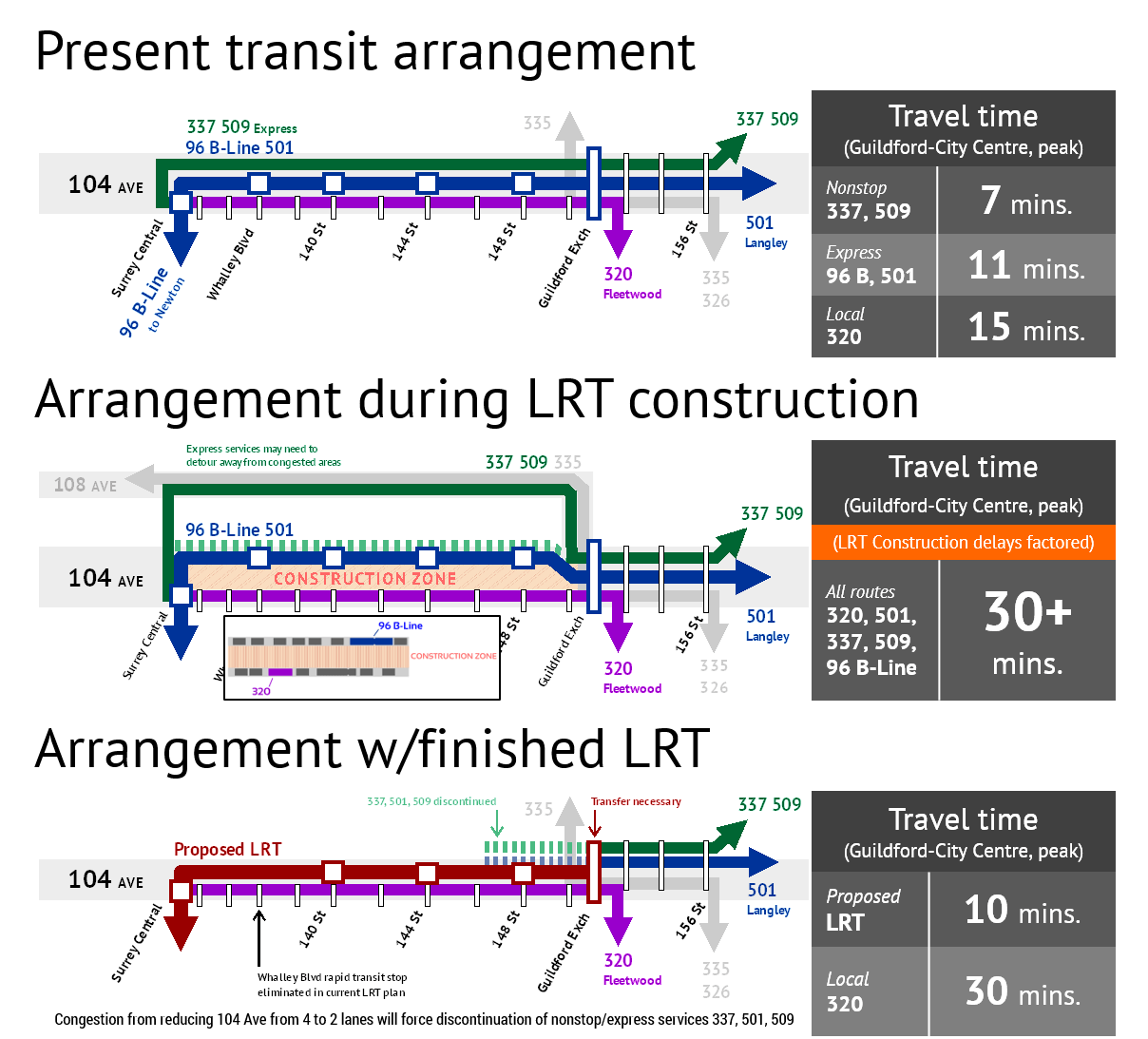 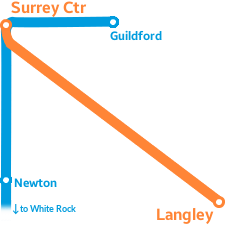 As part of our campaign to see SkyTrain extended on Fraser Highway, we are calling for the cancellation of the proposed L-Line LRT on 104th Ave. and King George Blvd., in favour of an extension of the 96 B-Line from Guildford to Coquitlam Ctr. and from Newton to White Rock.

In addition, a new SkyTrain Expo Line terminus at Langley Centre Station would allow Abbotsford Airport shuttles to operate on a shorter and less costly route between Downtown Langley and Abbotsford Airport, without compromising high quality access to Downtown Surrey and the rest of Metro Vancouver.

SkyTrain for Surrey is a local grassroots organization calling for a SkyTrain and Bus Rapid Transit (BRT) network instead of the currently-proposed on-street Light Rail system in Surrey. Our campaign has called on decision-makers to build the Langley Extension of the SkyTrain Expo Line, in conjunction with an extension of the 96 B-Line to Coquitlam Centre and White Rock.