We’re at odds with Linda Hepner’s erroneous claim that Light Rail in Surrey “will take 200,000 people out of their vehicles.”

At a recent all-candidates debate, Surrey First mayoral candidate Linda Hepner told voters that Light Rail “will take 200,000 people out of their vehicles” – a statement that has been featured on the Surrey First party’s Twitter page.

“This makes no sense at all. It shows yet again that Light Rail supporters don’t do their homework and have no sense in what transit solutions Surrey needs,” says Daryl Dela Cruz, a prominent Surrey transportation advocate and the campaign manager for Better Surrey Rapid Transit. 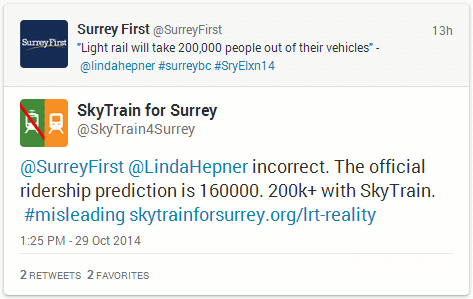 Better Surrey Rapid Transit (SkyTrain for Surrey) has raised several issues with the LRT proposal backed by incumbent Surrey First candidates. The proposed Phase I LRT – with a 25-min. travel time between Newton and Guildford – saves just 1 minute over the current 96 B-Line.

“A 1-minute faster LRT isn’t going to do a thing in solving Surrey’s extensive transportation problems. I have, for a long time, insisted this proposal is ridiculous,” Daryl says.

Disclaimer: Better Surrey Rapid Transit (SkyTrain for Surrey) is an ongoing, issues-oriented activism campaign and is NOT an election campaign.

Below: this advertisement keeps our website up and running. Thank you for your understanding.