We took a look at a 2010 study about the effects of the then-new Canada Line SkyTrain line; the study was commissioned by the TransLink and answered by panelists for “TransLink Listens”.  The study can be viewed by following this link: [CLICK HERE].

Here is a picture of a page on the document that says it all:

It does appear that riders do care about the speed, frequency and reliability of the service of rapid transit implementations.  Quite frankly these factor are some of the reasons that gives people the initiative to ride it. The ability to move many people quickly and reliably forms one of the fundamentals of rapid transit.

Another interesting note pertains to the aspects that the riders liked the least.  Various aspects were chronicled including those related to system overcrowding (dissatisfaction of which grew significantly between this 2010 survey and the 2009 survey), infrequent service (probably more of an issue during off-peak hours) and station design issues.  The fact that only so few people had issues with station design is significant because a lot of station design problems had to do with the fact that many of these issues had to do with the fact that the line is grade-separated.  A rider may need to climb or drop down one or more stairways or escalators or endure an elevator ride to access the station platform.

Nevertheless, the fact is: Speed, frequency and reliability are much more important contributing factors to overall system ridership than station design and accessibility.  This can have a huge impact on the difference a system makes and whether it is sustainable for TransLink to operate the system or not (more riders = more revenue) with room for service increases. This is a consideration that can be made in Surrey – it is true that at-grade Light Rail implementations could be easier to access at street level, but that does not necessarily mean it will matter to more riders than the service’s frequency, speed and reliability.

The Canada Line, whilst having a maintaining a comparably slower average speed of 35km/h (the Expo and Millennium Lines maintain 44km/h), can whisk you between Richmond or Vancouver International Airport in 25 minutes – a travel time you just cannot reach if driving or taking a bus down the city corridors just cannot allow for.  It has done this and become the preferred choice for Richmond-Vancouver travel while maintaining a slower average speed average than other SkyTrain Lines (35km/h vs 44km/h on Bombardier Innovia Advanced Rapid Transit (ART)-based implementations, , CORRECTION: there has been a slight mistake in our math – the Canada Line does offer a higher station-to-km density, which may account for the lower average speed – not that it is any less competitive this way).  As a result of the Canada Line’s fully grade-separated right-of-way (ROW), major service disruptions are rare if any; the Canada Line can be expected to be as reliable as existing SkyTrain, which provides well over 90% of its service on time.

The Canada Line has also been successful in attracting the motorists from the automobile for the purpose of their Canada Line trip; a substantial amount of the questioned riders (45%) were single-occupant-vehicle (SOV) drivers before they were making use of the Canada Line, while 44% of riders were (though some may have been both drivers and ride-sharers) ride-sharing in automobiles.  This has resulted in a positive contribution to the global environment, with several tonnes of greenhouse gas emissions having already been removed. 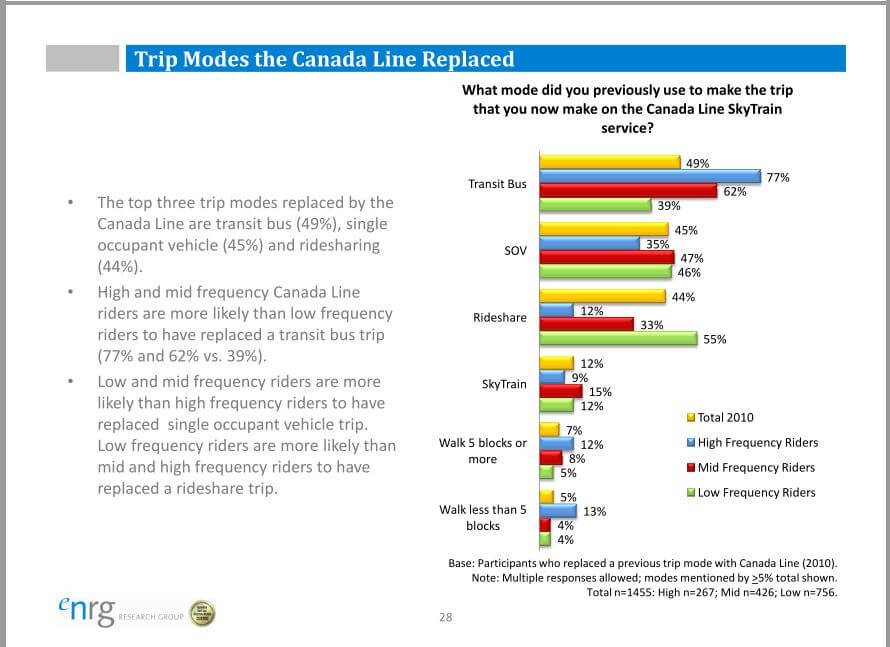 When you provide a rapid transit that’s fast, reliable and convenient, people are more likely to choose it and ride it.  This means the provider of the service receives more revenue, and this additional money can be used to expand this transit operation to meet demand as well as be shared and used to expand local underlying bus operations to allow them to meet demand; it also means a larger reduction of greenhouse gas emissions through the higher amount of automobile motorists attracted onto transit.