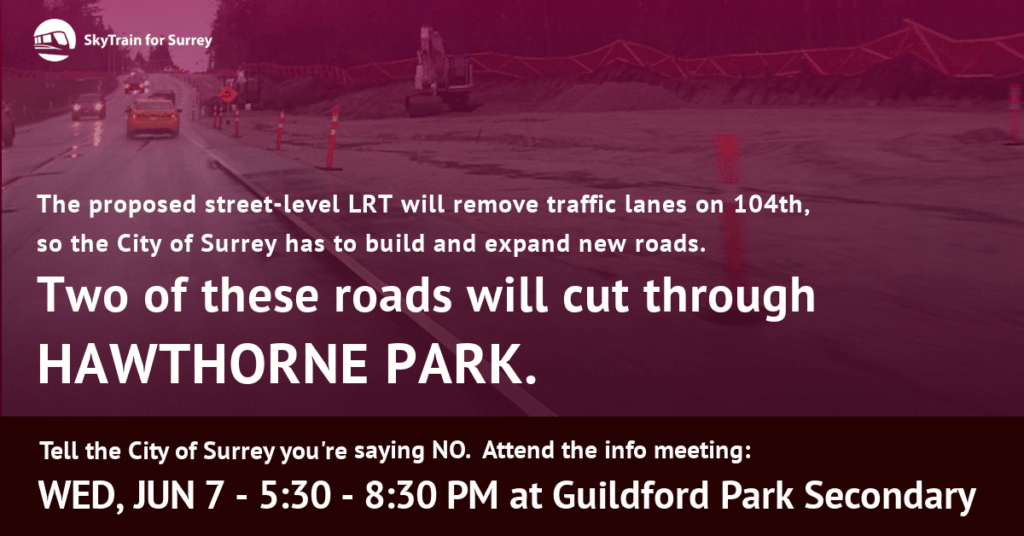 One of the first major victims of Surrey’s shortsighted and problem-riddled plans for street level Light Rail will be Hawthorne Park.

The City of Surrey is planning to build two new roads (see: 105 Avenue connector) that will cut through Hawthorne Park and split it in two. The city states that this project as “important to ensure reliable and efficient access” in the local area as a result of proposed access restrictions on nearby 104 Avenue, where road capacity will be reduced from 4 lanes to 2 lanes, to accommodate LRT at street-level. City staff have also admitted that the underground utilities which are being moved from 104th (so that it can accommodate LRT) will be built under the new roads.

The City will be hosting an information meeting about this project at Guildford Park Secondary School tonight starting at 5:30PM. We are urging all available supporters to come to this meeting and tell Surrey you’re saying NO to the 105 Avenue connector and the destruction of Hawthorne Park as a consequence of building street-level rail.

Voice your opposition!
SkyTrain for Surrey encourages you to attend the City of Surrey’s information meeting on June 7 and voice opposition to the project.

Say NO to the destruction of Hawthorne Park for LRT