The “Vibrant Communities, Productive Citizens” vision, released Friday, details a “more practical rapid transit vision” for the City of Surrey. The 16-page report includes a segment on the Surrey LRT proposal that lists a number of serious flaws in the current LRT proposal.

One of the most serious flaws pointed out is a total lack of benefits on 104th Ave to Guildford, a corridor that was featured in a prominent City of Surrey LRT concept video. The report notes that express riders on the 96 B-Line will save just 1 minute on the proposed LRT, after facing significant travel time increases during construction – and also notes that the loss of nonstop express service will increases travel times for riders from Fraser Heights (337) and Walnut Grove (509).

Key slides from the report:

Other faults were pointed out, including a serious service disruption risk to the project benefits. The LRT passes through the region’s most accident-prone intersections, creating a risk that riders face service disruptions as frequently as once every two-days as Light Rail trains are not as flexible for detouring around accidents unlike Bus Rapid Transit (BRT), and cannot avoid them like SkyTrain.

Better Surrey Rapid Transit (skytrainforsurrey.org) has pointed out in previous releases that the City of Surrey LRT proposal poses little transportation benefits to Surrey stakeholders with a negative business case, and has increased in cost to $2.44 billion, which could afford two SkyTrain extensions in the South-of-Fraser to Langley and Newton. SkyTrain campaigners like Daryl have worked tirelessly to raise issues with the current proposal and advocate for the adoption of more practical rapid transit solutions for Surrey and the South-of-Fraser.

Daryl is hoping to attract the attention of Mayor and Council candidates in the upcoming municipal elections, and has pledged to tour community associations this summer in presenting the vision and educating stakeholders on the downsides of the current LRT proposal that have been continuously ignored by advocates. 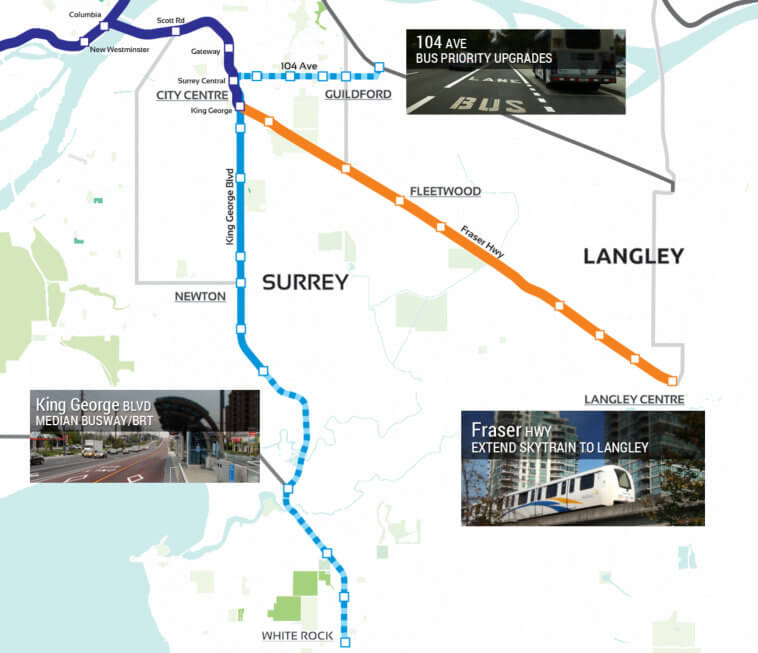 The “Vibrant Communities, Productive Citizens” vision proposes an alternate, more practical solution that involves the following improvements instead of the current LRT vision:

[scribd id=233525105 key=key-LKrWSTh6HP5S2XfBomCl mode=scroll]
The vision compiles data from sources such as the TransLink Surrey Rapid Transit Study, finding that there is a potential to generate 2x the transportation benefits compared to the current LRT proposal, with a lower capital cost requirement of just $2.3 billion vs. $2.44 billion for the proposed Surrey LRT and a positive 1.13:1 benefit-cost ratio.

Below: this advertisement keeps our website up and running. Thank you for your understanding.