Although light rail supporters have claimed that the change from LRT to SkyTrain will delay transit plans for “decades”, the target dates in TransLink’s new work plan mean that significant transit improvements on all three corridors will actually come 4 years sooner than originally proposed in the regional 10-year-vision.

Under TransLink’s proposed work plan, the 16km extension of SkyTrain from King George Station to Langley will start service in 2025. This timeline accounts for 13 to 15 months of initial project development (including support works, public consultation, environmental reviews, and business case work); another 15 months for the full procurement process; and 48 months for the line’s construction.

Under the original timeline set in the Mayors’ 10-Year-Vision, a Surrey-Langley LRT at street-level would have opened 5 years after the (now-cancelled) Surrey-Newton-Guildford LRT were to have opened in 2024. The new timeline for SkyTrain targets a 2025 service start, meaning rapid transit on Fraser Highway will now be delivered 4 years sooner than previously anticipated.

TransLink has previously confirmed that Surrey-Langley SkyTrain business case work will “be completed for the corridor as a whole, regardless if the construction is conducted in one or two stages.” This means that all 16 kilometres of SkyTrain to Langley City could be in service by 2025. 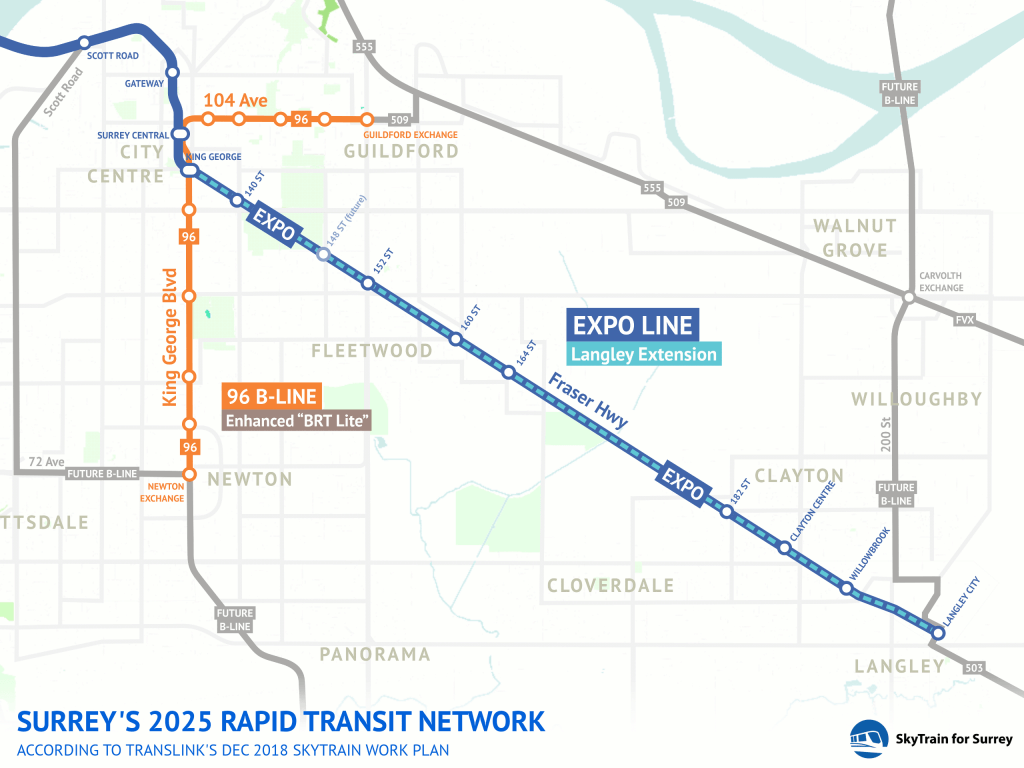 In addition to building 16 kilometres of SkyTrain, the work plan also calls for the current 96 B-Line to be improved to an upgraded B-Line standard, with investments in landmark B-Line shelters, next-bus displays, traffic signal priority, and dedicated bus-only lanes. As these upgrades will draw on funding redirected from the proposed interim B-Line service on Fraser Highway, they will likely be in place by next year (2019).

As a Bus Rapid Transit “lite” system, the improved 96 B-Line will deliver travel speed and quality of service that is comparable to the originally proposed light rail, and superior in many respects—especially as the rapid buses will be able to avoid blockages and accidents that would impact and shut down ground-level trains.

These improvements will be a game-changer for Surrey and Langley residents who have waited patiently for a rapid transit system that will deliver real, tangible improvements. The new SkyTrain extension will inherit the current SkyTrain system’s leading 96% on-time record, delivering an ultra-reliable rapid transit service that better connects South of Fraser communities to the rest of the region and with each other.

It is clear, more than ever, that a SkyTrain extension was always the right choice for Surrey and Langley on the Fraser Highway corridor. SkyTrain for Surrey has long championed this rapid transit vision combining SkyTrain expansion and Bus Rapid Transit, with a long-standing belief that such a vision would offer more transit improvements to South-of-Fraser commuters sooner than the LRT vision.

We strongly urge the Mayors’ Council to recognize South-of-Fraser transit needs and approve the proposed TransLink resolution on December 13th.