“Having my druthers, I would go with SkyTrain”

he said, adding that he hoped the line could, in the long term, be extended as far as the Abbotsford Airport. (Langley Advance – “Rail depends on fed budget” – March 16, 2016)

SkyTrain for Surrey campaigners and supporters are applauding Langley City Mayor Ted Schaffer, who declared his preference for a SkyTrain extension to Langley over currently proposed at-grade Light Rail Transit at a Greater Langley Chamber of Commerce meeting Wednesday afternoon.

“We applaud Mayor Schaffer’s support for extending SkyTrain to Langley, which shows that leaders South-of-the-Fraser recognize the need for real, effective rapid transit solutions – not second-rate solutions with major trade-offs.” 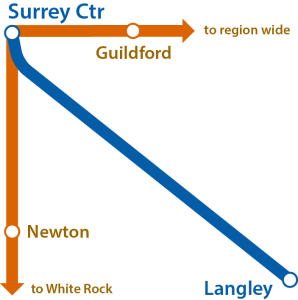 SkyTrain for Surrey is the leading voice against proposed LRT for Surrey, and has drawn attention to numerous issues that will arise as a result of an at-grade LRT, including increased congestion and potential safety issues. (A full list can be read at skytrainforsurrey.org/issues).

Studies on Surrey/Langley rapid transit indicated that combining a SkyTrain extension to Langley with an upgrade of the 96 B-Line to full Bus Rapid Transit would be superior to LRT, with higher transportation benefits while costing the same to build and less to operate.

Over 1100 supporters have signed SkyTrain for Surrey’s petition, urging that proposed Light Rail Transit for the South-of-Fraser be changed to a SkyTrain and Bus Rapid Transit system instead.

SkyTrain for Surrey is a local grassroots organization calling for a SkyTrain and Bus Rapid Transit (BRT) network instead of the currently-proposed on-street Light Rail system in Surrey. Our campaign has called on decision-makers to build the Langley Extension of the SkyTrain Expo Line, in conjunction with an extension of the 96 B-Line to Coquitlam Centre and White Rock.